Jan and Bren Buck’s (2WI) Great-great-great grandfather Private Amos Buck, a 36-year-old carpenter from Farmington, WI, enlisted as a musician in Company B, 36th Wisconsin Volunteer Infantry. He served with the unit in the battles from Cold Harbor through the Siege of Petersburg, where he was wounded in action.  He mustered out in May 10, 1865.
Jan’s Great-great grandfather, Orville M. Buck, a 17-year-old farmer also from Farmington, WI, enlisted as a Private in Company C, 1st Wisconsin Heavy Artillery.  After mustering at Camp Washburn, the unit transferred to Chattanooga, TN then fought in the Battle of Missionary Ridge.  He mustered out in Nashville in September 1865.

John Mann’s (8AR) Great Grandfather Robert H. Mann in August 1862 at age 33 enlisted as a Private in Company F, 111th Ohio Infantry.  Serving under General Thomas, he fought in the battle of Franklin TN pouring enfilading fire into Confederates who had broken through the lines. He mustered out with the regiment in June 1865, died in September 1893 and is buried in Forest Home Cemetery, Hicksville, OH.
Robert H. Mann’s adopted daughter, Elizabeth Davidson, married James Henry Winters, in October 1861 at age 28 enlisted as a private in Company H, 13th Michigan Infantry, rising to the rank of Quartermaster Sergeant. He was discharged due to disability, but reenlisted into Company E 13th Michigan Infantry in January 1864 as a private – again ring to the rank of Sergeant before mustering out at Detroit in June 1865.
Robert’s 5th child, Robert E. Mann, married Nora Annette Presler who was the daughter of Jacob Presler.  In August 1862 at age 17 Jacob enlisted as a Private in Company H, 88th Indiana Infantry. He served under General Sherman throughout the campaign for Atlanta and Savannah, GA, north to Bentonville, NC and took part in the Grand Parade in Washington D.C. He mustered in June 1865 at Washington, D.C. Jacob died in April 1925 and is buried in Forest Home Cemetery in Hicksville, OH
Two of Jacob’s brothers, Simon and Samuel Presler enlisted in the 21st Ohio Infantry as privates. Simon enlisted at age 18 as a private in September 1862. The 21st fought at the Battle of Chickamauga guarding General Thomas’ headquarters which was overrun by the Confederates, killing, wounding or capturing around 75% of the 21st Regiment. Simon was one of the few who escaped. Simon’s luck ran out in March 1864 when he was shot in the chest by another union soldier coming off picket duty near Rasaca, GA.  He died at the Military Hospital in Chattanooga. According to his military records he was buried in Marietta, GA, but there is a headstone in the Big Lick Township Cemetery, Hancock County, OH for him. It is unknown whether his body was brought home after the war or still rests in Marietta.  Samuel enlisted 29 September 1862 at age 26. He died of disease 22 December 1862 and is buried in the Nashville National Cemetery. Samuel’s widow married Nathaniel Fife who served as a Corporal in the 144th Ohio Infantry.
Another Presler sister, Phoebe married John Banks Moore who was killed while serving alongside Simon and Samuel Presler in Company K 21st Ohio. She then married John Aldrich who enlisted in the 87th Indiana Infantry. After his death she married Thomas Raplee who served in Company B, 148th New York Infantry. Her final marriage was to another Veteran of the Civil War, John Street who enlisted in Company I, the 6th Michigan Heavy Artillery.
Another Presler brother, George Washington in June 1864 at age 18 enlisted as a Private in the Company G, 178 Ohio Infantry. He survived the war and moved to Emerson Township, MI. He died in February 1828 and is buried in the Emerson Cemetery.
A sister, Catherine Presler married Abraham Harshberger who at the age of 30 was drafted into the Company C, 47th Ohio Infantry in October of 1864.  After the war they moved to Quimby, MI where he died 5 April 1904. He is buried in Striker Cemetery.
Robert H. Mann’s eldest brother, Thomas moved from Ohio to the Savannah, MO in the early 1840’s. A daughter, Mary Ann married Seneca Reeder who enlisted 18 July 1863 in the Company D, 4th Independent Ohio Cavalry, for 6 months. He then reenlisted in the Company G, 41st Ohio Infantry in  Oct 1864 and was mustered out September 1865 at St. Louis, MO.
Another daughter, Josephine married James Riley Bazzill who in April 1862 at the age of 16, enlisted in the Company D, 4th Missouri State Militia Cavalry (Union) as a Private. He was mustered out 3 April 1865.
Great Grand Uncle (mother’s side) David Duncan enlisted as a Private in Company A, 23rd Michigan Infantry, 6 August 1862. He was mustered out with the regiment at Salisbury, NC in June 1865. David was born in Scotland and immigrated to Canada with his parents and family and then settled in Gratiot Co., MI in 1860. He died 10 March 1918 and is buried in West Washington Cemetery, in Gratiot County. 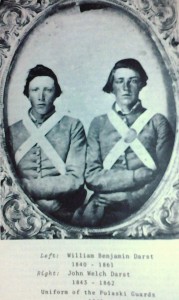 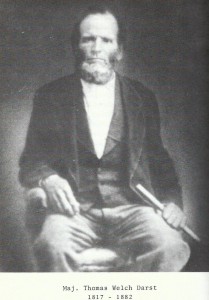 Major Thomas Welch Darst (picture on right) from Pulaski, Virginia was a major in the Virginia Militia at the start of the war and served the Confederate government in a civil capacity until 1864 when he enlisted as a private in the 4th Virginia Reserve Regiment to defend the Shenandoah Valley against General Sheridan.  He survived the war, but his two sons were not so lucky.
Jack and Willie Darst (left photo), Jim’s great-great-uncles, served with Company C (Pulaski Guards) of the 4th Virginia Infantry of the Stonewall Brigade.  Willie died of disease while caring for a mortally wounded cousin after 1st Manassas.  Jack died of wounds from artillery shrapnel received at Brawner’s Farm.
My mother’s family always was pretty much die-hard Confederate, but now I find that there was a yankee in the woodpile.  I came across this tintype of one of my great-great granfathers, Cpl. Thomas Jefferson Davis.  He was a music teacher by trade, and dabbled also in Ohio politics as a Republican.  In 1864, he enlisted as a musician with the 136th OVI at the age of 40.  He died in 1908.  His neighbors were named Harding and one of their sons, Warren by name, was my great -grandfather’s best friend in his younger years.  Waren Harding became president, as you know. 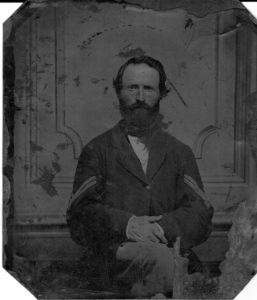 Dick Hanson (our member from Havre, Montana) says: “My grandmother was 102 years old when she passed away and in her later years, she always talked about being a little girl in Kansas and riding on the mail wagon with her disabled grandfather.  He was always on crutches and his right leg was swollen twice its normal size, so his job was just to drive the wagon once it was loaded, from one rail head to another.
His name was Robert B. Fielding and he enlisted in Indianapolis, Indiana, on July 16, 1861. He was in Company F 11th Indiana Infantry.  On the 16th of May, 1863, he suffered a gunshot wound at the Battle of Champion Hill.  He was shot in the upper right leg/groin area.  He was taken prisoner on the field by the Confederates and was exchanged not long after.  He was in a hospital in Memphis, TN, from June 30, 1863, to October 31, 1863.  He was discharged, disabled, in March of 1864.  He died Nov. 4, 1908.
I am very fortunate in knowing the above facts, because my grandmother had saved several documents, such as enlistment papers, and documents issued by the Dept. of Interior Bureau of Pensions, etc.  It is somewhat interesting in how much paperwork was involved to get his $8.00/month.  Also, every 10 years he had to have an Army surgeon issue a Examining Surgeon’s Certificate and over the years, they all indicated the same thing – that the bullet was still lodged in his hip joint, that he suffered from a weeping wound, and an extremely swollen right leg.  As all my ancestors were born after his disability and discharge from the Army, I feel very fortunate to even be here!
As in most families, my grandfather’s grandfather was from Tennessee and both him and his brother were enlisted in the 19th Tennessee Infantry, Company G.” 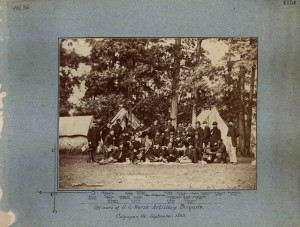 e’s Great-great-grandfather CPT William Goldie in the 1st Brigade horse artillery as a Quarter master.   His pictured on the far left in the picture at the left.  He was in the 56th Illinois but when disbanded he got into the Artillery unit. After the war he was brevetted as a Major then a Lt Col. 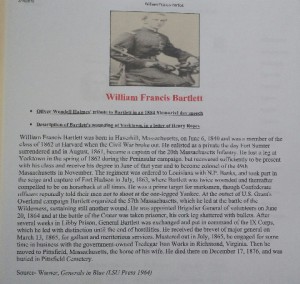 Al Bortles’s (2WI) Great Uncle John Bortles was 21 in August of 1861 when he enlisted as a Private in Company H, 83rdPennsylvania Infantry Regiment.  He was a First Sergeant when mustered out in September of 1864.

Al also has Civil War history on the Bartlett side of his
family, Major General William Francis Bartlett, whose story was made into a movie titled “Shot to Pieces – The Man That No Bullet Could Kill” 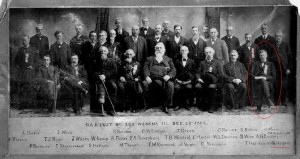 Infantry Regiment. He’s pictured seated at the lower right in this photo of his GAR post.  A detailed unit history of the 104th Illinois can be found here: http://www.104thillinois.com/homepage.htm

Tom Brown’s (56VA) grandfather twice removed, George W. Wilcox joined Co. F, 10th Connecticut Volunteer Infantry on September 10, 1861 and mustered out on October 7, 1864. Tom’s uncle twice removed, Stephen E. Wilcox joined Company F, 10th Connecticut Volunteer Infantry on October 8, 1861, mustered out and re-enlisted on January 1, 1864. He was mustered out of service August 25, 1865. Tom’s cousin twice-removed, Cadmus M. Wilcox was in the West Point class of 1846. His father was born in Connecticut and moved to North Carolina, where Cadmus Wilcox was born. His parents moved to Tipton Co. Tennessee. Upon learning that Tennessee had left the Union, He resigned His Commission and reported to Richmond Va. He was given command of the 9th Alabama Infantry Regiment. He ended the war with the rank of Major General.

Jan Buck’s (2WI) Great-great-grandfather, PVT Orville Buck enlisted in Battery C, 1st WI Heavy Artillery in September of 1863.  Battery C was mustered into the service in October 1863, at Camp Washburn, Milwaukee, WI, and left the state on October 30, proceeding at once to Chattanooga, where it remained until March 1865. After several transfers the battery was located at Nashville, TN, where on September 21st it was mustered out.  Upon returning to Madison, WI, it disbanded.

Mike Young’s (2WI) great-great-grandfather (and son Dan’s (2WI) g-g-g-grandfather) CPL Ferdinand Junge served with Co B, 9th WI from Oct 1861-Jan 1866 at Ft. Leavenworth KS, and marched through Missouri and Arkansas.  About a decade after the war he Americanized his German last name to Young.  He and his wife operated a bakery in downtown Manitowoc WI, and is buried at Forest Home Cemetery in Milwaukee in the family plot with a GAR marker.

- No Comments on this Post -
ACWSA Members CW Ancestors