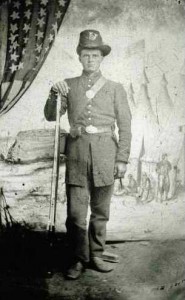 In today’s 2nd Wisconsin, you can compete with muskets, carbines, revolvers, smoothbores, and Henry rifles.  Our group is a family oriented team with a large roster.  We have numerous husband-wife, father-son pairs on the roster.

With a large roster, every member doesn’t need to attend every skirmish, but if you’d like additional skirmishes many of our members also belong to the 114th Illinois Infantry of the North South Skirmish Association (N-SSA).   The team also maintains an affiliation with the reenactors of the Second Wisconsin Volunteer Infantry Association, Inc.  Our uniform guidelines match theirs, so you can skirmish and reenact without buying separate uniforms.

You can join the 2nd Wisconsin anytime.  Our annual Meeting is on the first Saturday after Super Bowl weekend.  For specifics on this years’ time and location, call Gary at the number above, or e-mail garyvank@aol.com

Additional information on the 2nd Wisconsin, along with useful information about everything from buying the equipment  you need, cleaning muskets and loading your ammunition in a nine-page .pdf document we give to our new members titled New Member Information