The official ACWSA roster as of March 14, 2017 has 184 members.   The Michigan region has 93 members spread out over 10 teams.  The Wisconsin/Illinois region has 91 members on its 7 teams.  The scatter diagram below shows where the majority of the membership is located, but not everyone is on the map.  We have members as far west as Montana, as far east as North Carolina, and as far south as Florida. 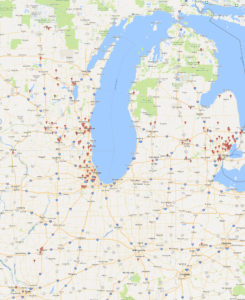